From fiction, non-fiction, and memoir, to children's books, poetry, and essays, members of our author network have something for every reader.

Check out the great books below and connect with the authors through their websites and social media. Timothy Anders is the author of Choosing Barabbas. A local Pastor and Library Assistant by day, novelist by night, he received his bachelor of science degree in History from Appalachian State University. A Sparta, NC native, he is a lover of sports, card games, finding laughter in any situation and spending time with his cherished wife. You can read more of his unpublished collection at https://itakeabreath.wordpress.com and follow him on twitter @BroTimAnders and Timothy Anders-Author on Facebook. Kate Clay Bodeen ("Kay") is a native of Watauga County, North Carolina, born and raised in the Sugar Grove/Valle Crucis area. A graduate of Woman's College (now UNC-G), she spent her working life in Washington, DC—the last 30 years of it as financial aide to the founders of Marriott International, J. Willard and Alice S. Marriott, and as administrator of their family foundation.

Kay retired to Sparta, NC in 2005 and shortly thereafter began research for her first biographical fiction – Pat Crisp, Like a Moth to the Flame – which won an award by the NC Society of Historians. This was followed by Allie – Musings of a 20th Century Pioneer, based on the life of her mother. Her most recent publication (2021) is a children’s book – From Gitcat to Ditto – A Dump Kitty's Journey.

Kay has enjoyed her involvement in Alleghany Writers since its inception and is currently active in a writing critique group composed of AW members.

FROM GITCAT TO DITTO - A DUMP KITTY'S JOURNEY:
Hot off the press is my new children's book, based on the antics of Ditto, the smartest and most cunning cat I've ever owned. Its 40 pages contain some 30 photographs of Ditto and Polly, my older kitty - some of the photos catching the mischief makers in acts of misbehavior. Ditto narrates the story. And when you see Polly, you will understand why Ditto is so named. The book should appeal to children from 3 to 10 years and to anyone older who is still a child at heart.

Kay's books are available at A Touch of Grace in Sparta, NC. 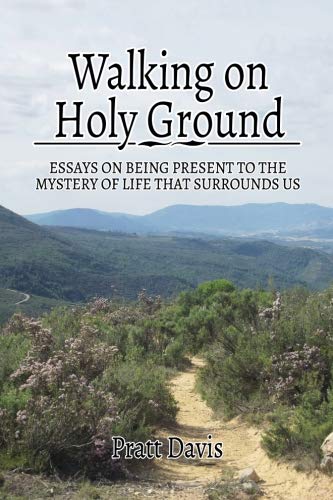 Pratt Davis has published a collection of contemplative essays titled Walking on Holy Ground: Essays on Being Present to the Mystery of Life that Surrounds Us. Pratt is a former teacher of English and a retired CPA who lives in Sparta. She is an avid reader and an active volunteer in the community.

Although there were signs that a writer lurked within her, Pratt’s first love was reading. It was a love of reading that caused her to elect a major in English at UNC-G. "I always have one or two books that I'm reading," explains this 20-year member of a local book club. "My Dad used to read to me when I was a toddler and I would say 'read it again, Daddy.' He would, and I'd say, 'read it again.'" Her sister called her attachment to reading an addiction.

It was her role in her church that caused Pratt to begin writing the essays. She attended the church's Annual Conference in June of 2014 as a lay delegate and was supposed to write a report for the local church newsletter about events at Conference. Instead she wrote about the experience from a reflective point of view. Pratt says, "I always thought I would do some writing, but that never happened until the monthly newsletter gave me a deadline and an audience."

Pratt's reflective approach struck a chord with others. "I’ve had people who come up to me and say, 'I love your articles, I can’t wait for the next one.'"

The idea to collect the essays into a book came from a second cousin to her husband. She had shared one of her essays and that cousin kept asking for more. Pratt thought she would print copies of the articles and give them as Christmas gifts, but never got that done. At her husband's suggestion, she explored having the essays collected in a book. With the help of a local publisher, Walking on Holy Ground was born.

The name for the book was taken from one of the essays that she wrote almost two years ago when she was a kidney donor for her adult son. She says, "The theme of that article seems to capture the overall concept of what the essays are about." Her essays reflect her spiritual journey. In the book, she tells a little about how she went from sitting in the pew to participating in an in-depth Bible Study, from beginning a practice of meditation to enrolling in a two-year program in Spiritual Direction in 1998. In that program, she was introduced to a variety of spiritual traditions and practices along with the study of dreams and the psychology of Carl Jung. The essays in her book reflect the practices and way of looking deeply at life's events, at the natural world, and at ourselves that she has experienced.

The essays invite readers to look at the ordinary surroundings of their lives through a contemplative lens. They ask us to a slow read, not a quick read, where we can sit with, think about, and chew on the thoughts shared in them. Each essay gives us a glimpse of the Mystery that surrounds us and the Meaning that runs like a thread through our lives. We are asked to stop, look closely, and appreciate the world around us. We are encouraged to see below the surface of our lives and experience the Mystery and Meaning for ourselves. Edward Di Gangi is the author of several short stories. The Gift Best Given is his first book.

Born in New York City, Edward now lives in Hillsborough, North Carolina with his wife Linda. Their son, James, lives in nearby Durham.

The Gift Best Given:
"Like a jigsaw puzzle, every story is made up of pieces; big ones, smaller ones, pieces not easily found, tiny and hiding, essential to complete the picture."

At almost seventy years old, Edward Di Gangi had never given much thought to the fact he was adopted but, as he finally begins to explore, he pieces together the life story of an extraordinary woman—his birth mother.

Genevieve Knorowski left home at the age of seventeen in the midst of World War II to join an ice-skating company in Vancouver and went on to achieve fame as an ice show performer, skating in the United States, Central and South America, and across Europe.

It is a decision Genevieve makes on Easter Sunday in a church on New York City's Upper West Side that will forever connect the life of a young woman pursuing her dreams with the life of a seventy-year-old man searching for answers to the lifelong questions of who we are, where we come from, and what family means. Stacy Hawks holds a B.A. in History & an MEd. from Liberty University. Her novel Dividing Ridge: the Unsolved Murder of Elva Brannock is the first book from Alleghany to be featured on the NC Literary Map, and Stacy is working on her second novel coming late 2021.

Dividing Ridge:
After a young woman goes missing on her way to school a community is left on edge. With news spreading quickly of her disappearance and gossip swirling, it is up to local law enforcement to restore a sense of safety and one determined Sheriff to bring justice to her family. Through a career in education bridging elementary classes to the university level, Dr. Suzanne Mellow-Irwin has served in various positions: classroom teacher, curriculum supervisor, superintendent of schools and university professor. Educated at Trinity College in Washington, D.C., she holds a doctorate from the University of North Carolina at Chapel Hill.

She presently lives at Stratford Oaks Farm in Sparta, North Carolina, where the art of storytelling has endeared her to "children" of all ages. Eldon Joines, a native of Alleghany County and the grandfather of five grandsons, operated a fabric store and upholstery shop on Main Street in Sparta with his wife Kathy until they retired. An avid outdoorsman and active in the local community, Eldon served as a Boy Scout leader for many years. He enjoys tending to the family property—the seventh generation to do so— researching local and family history, and writing. After the birth of his grandson Landon and the incredible journey that followed, Eldon took on the task of recording what happened. The result is Landon's Story.

Landon's Story:
After Landon's birth, a surgeon told his family that Landon would die. His intestine had twisted, and his small intestine was dead. "You can’t survive without a small intestine," the surgeon said. The family mourned and waited for Landon's death until God intervened and revealed that Landon could survive with a small intestine transplant. But, Landon would need to survive the removal of the dead intestine, intravenous nutrition, infections, liver damage, and many other challenges before growing old enough and big enough to survive a transplant—about two years old. Landon's Story is the journey, as told by his grandfather Eldon Joines. Zoe M. McCarthy, a full-time writer and speaker, was pegged an expressive analytic in a personality test. Isn’t that an oxymoron? Maybe, but Zoe couldn’t survive without expressing her creative imaginings while she followed an actuarial career performing mathematical analyses. As an introvert, she receives her energy from writing alone in her home office overlooking the Blue Ridge Mountains of Virginia. She enjoys leading writing workshops and teaching a community Bible study. Zoe and her husband, grandparents of six, enjoy canoeing and spending time at their lake cabin, where she writes during month-long sabbaticals—alone.

Published works:
Believing opposites distract, Zoe creates heroes and heroines in her contemporary Christian romances who learn to embrace their differences. These traditionally and self-published romances involve tenderness and humor. She also has a book of contemporary allegories covering topics such as the power of prayer, how God provides, letting go and letting God work, and sharing faith. Her book, Tailor Your Fiction Manuscript in 30 Days, is designed to shape a not-yet-submitted, a rejected, or a self-published manuscript with low ratings into a book that shines or to guide writers starting a manuscript.